The Eastern Partnership has proven to be a viable initiative, providing the grounds for a beneficial dialogue, a boost in trade flows between the EU and the neighbouring countries and increasing the overall favourable opinion on the European Union in the six states.

There are five important economic trends for the EaP countries, which will determine their prospects for the future. First, the effects of the DCFTA agreements in the case of Ukraine, Georgia and Moldova. Second, the role of the ICT sector and the diversification of the economy. Third, problems related to demography and migration. Fourth, developments of transport infrastructure and fifth, the possible implications of a new economic crisis and the economic vulnerabilities of the EaP countries.

Despite their geographical and economic differences, the Eastern Partnership has proven to be a viable initiative, providing the grounds for a beneficial dialogue, a boost in trade flows between the EU and the neighbouring countries and increasing the overall favourable opinion on the European Union in the six states.

The assessment of the effects of the Deep and Comprehensive Free Trade Areas is an important step because the agreements serve as a benchmark for those EaP states that did not agree to closer association and access to the EU single market. Positive results may serve as an additional incentive to deepen partnerships with the others.

Moldova and Georgia joined the DCFTA in July 2016 and in the case of Ukraine, it fully entered into force in September 2017, offering the associated countries the “four freedoms” of the EU single market, with some limitations concerning the free movement of capital, goods, services, and people.

Among the three members, Moldova has witnessed the strongest signs of a developing partnership between 2013 and 2018 – over 60% growth in exports, while also increasing the EU’s export share from 56% (2013) to 74% (2018). Ukraine saw a significant growth of its exports to EU as well – 20% growth from 2013 to 2018, while the EU’s share in Ukraine’s exports also increased: from 27% (2013) to 42% (2018). It is important to note, that this increase happened even though Ukraine was experiencing an armed conflict in Donbas, losing parts of its territory and seeing a 25% decrease in total exports. Among the three DCFTA members, Georgia had the lowest increase in its exports to EU, six percent, while the European Union’s share between 2013-2018 remained the same (16%). The reason behind it is that Russia has lifted sanctions, imposed on Georgia’s agricultural products in 2005-2006, resulting in the increase of the export share of Russia from eight percent (2013) to 22% (2018).

Overall the effect of the DCFTA proved to be beneficial for these countries, especially in terms of export, while the growth in foreign direct investment was insignificant. These promising results could encourage other EaP countries to follow suit.

One sector that plays an important role in the majority of the EaP countries is Information and Communication Technology (ICT). The ICT sector is expected to grow even more rapidly in the next decade. Its success is due to comparable ease to export services, which goods suffered more high costs after the dissolution of the USSR. Thus, it was a logical decision for many countries to jump on the bandwagon of a relatively new sector. Belarus, Armenia, Ukraine, Moldova and to a lesser extent Georgia started by providing incentives to the big tech companies and the adaptation of favourable regulations. Another reason for the sector’s success was the relatively safe degree of investment and a lower degree of corruption.

Belarus has large tech parks and attracts a great number of foreign investments. Ukraine is one of the region’s leaders, with a high number of the Fortune 500 list relying on its country-based expertise. It also has the fourth-largest ICT workforce in the world. Already under the Soviet Union, Armenia was a notable IT centre where 40% of military mainframe computers were created. The country was a natural choice for further development of the sector and now has a year-on-year 25% growth rate, also supported by a large Armenian diaspora. Moldova has a high share of ICT services in relation to its GDP and overall exports, partly because of other low-performing sectors. Azerbaijan is characterised by a high imbalance: while declaring the ICT sector a priority, its share in overall export is still very low. Baku remains very dependent on the export of natural resources.

As such, the ICT sector will play a crucial role in the future economic development of these countries. One challenge remains the region’s ability to further innovation within the sector and let its local tech grow into big enterprises before seeing them depart to the United States.

Demography plays a crucial role in the economy. A population with a low average age can give a significant boost to the labour market, as it happened after the Second World War, while a high average age creates a deficit of labour and puts pressure on the healthcare and pension systems. Almost all of the EaP countries – with the exception of Azerbaijan – saw a significant decrease in the population between 1991 and 2018 and today face the problem of an ageing population.

Ukraine is the “leader” in terms of population decrease, in absolute numbers, from 51.9 to 42.4 million since gaining independence. Weak economic performance in the EaP has lowered fertility rates, increased mortality rates and reduced the average life expectancy.

However, migration is the most important reason for the population decrease. In the past, people moved from the EaP countries to the Russian Federation but in the last few years, this trend has changed, also due to of a badly performing Russian economy and a devaluation of the currency. Migration patterns have reoriented to other, mostly EU labour markets. Ukraine and Belarus see an outflow to Poland, Moldovans migrate to Italy and Georgians go to other EU member states. Absent a recovery of the Russian economy, the EaP workforce mostly will target the EU as a labour destination in the next decade. This will result in more people-to-people contact and economic ties between the EU and the EaP, while not resolving the significant demographic challenge for the eastern neighbourhood.

To a large degree, the development of transport infrastructure and international as well as external connectivity will have an impact on areas such as trade, economic growth and migration. Many of the countries in the region – Ukraine, Moldova, Georgia, Azerbaijan, Armenia – have a challenging situation in terms of infrastructure because of frozen conflicts and threats from geographical isolation.

The EU foresees that the development of the infrastructure significantly will bolster economic growth and create additional job opportunities in the region. This is why in 2017 the EaP countries were included into the trans-European Transport Network (TEN-T) and in December 2018 a so-called Investment Action Plan was adopted to provide almost 13 billion euros investment to construction and rehabilitation of a total of 4,800 kilometres of roads and rail network, six ports and 11 logistics centres by 2030. The biggest beneficiary of the investments will be Ukraine (4.4 billion euros) and Georgia (3.4 billion euros). All the proposed investment projects should boost trade and economic relations of the region, while also increasing mobility and interpersonal relations.

There is a reasonable chance that another global economic crisis could have lasting consequences for the EaP region. This could be the result of a slowdown of the Chinese economy, protectionist economic policies and tariff wars that hamper trade.

Not all economic trends foresee a negative scenario for the EaP region. A deepening of trade relations with the EU based on the DCFTA agreements and increased exports in the short run will help to avoid a sudden economic slowdown and could have favourable long-term effects. Strong growth in the ICT sector and ambitious infrastructure projects will encourage greater connectivity with and between the countries of the region. Nevertheless, it is important to emphasise the implications of demographic decline and migration in the EaP countries: a labour deficit, a sizeable brain drain and additional pressure on the healthcare and pension systems; while in case of a new global economic crisis, some countries are extremely vulnerable to any serious slowdown and would fall into recession for years. 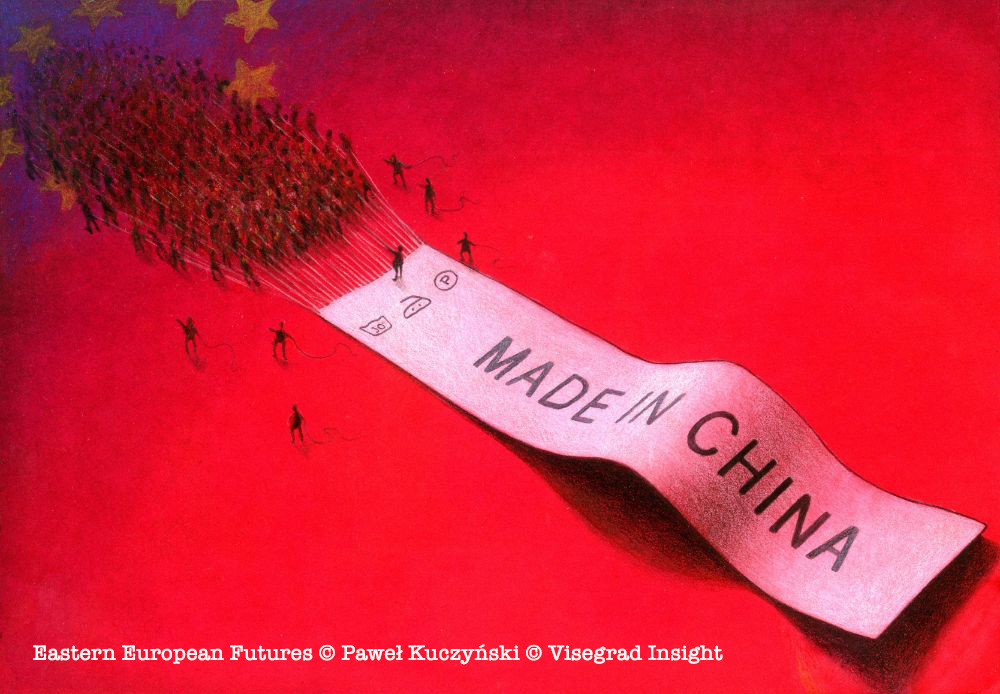 The EU remains Armenia’s largest export market. Armenia has managed its isolation, closed borders and unresolved conflict to focus on the development of its ICT sector, which has surged by some 25% annually. Endowed with a sizable global diaspora that is both politically sophisticated and technologically adept, the outlook for the development of Armenia’s ICT sector and services industry remains promising.

Although Azerbaijan is not interested in EU integration, it pursues a Strategic Partnership and the EU is the country’s main trading partner. Azerbaijan’s ICT sector plays a marginal role and the share of ICT services in overall exports is still very low, at a meagre 0.3% of total exports. But the main problem stems from dependence on energy for over 91% of exports, accounting for 44% of GDP.

For Belarus, years of sanctions and close ties to Russia have limited economic relations with the EU. Although trade with the EU is growing and accounts for roughly one-third of total external trade, the starting point is low. Belarus is one of the most vulnerable EaP countries, given its deep dependency on discounted Russian gas.

Although Georgia has a DCFTA agreement with the EU since 2016, of each of the three EaP countries with DCFTAs, Georgia posted the lowest increase in its exports to the EU, at only six percent. In the ICT sector, there is some growth, although ICT represents the second lowest share of ICT services in exports among EaP countries, at a marginal 1.2%.

Among the three DCFTA countries, Moldova has posted the strongest increase in trade with the EU and the EU is Moldova’s largest trade partner. The ICT sector plays a significant role in the country’s economy and Moldova holds the highest share of ICT services in both its exports and GDP. Moldova also has the largest ICT-related workforce, in relative terms, with the most people employed in the sector among EaP countries.

Ukraine expanded exports to the EU – the country’s largest trade partner. Ukraine became a leader in ICT services and has the fourth-largest ICT workforce in the world. ICT service exports have surpassed all other EaP countries combined, with the service’s share in total exports standing at 5.1% in 2017. Of the EaP countries, Ukraine suffered the most from population loss in absolute numbers and remains economically vulnerable.