EU Pivot to Moscow: Scenario 3 for the Eastern Partnership 2030

Recognising a rare window of opportunity, EU leaders embrace a revised approach to Russia in order to ease economic and political tensions and establish the ground for a new European security architecture.

The EU agrees to downplay political differences for the time being while prioritising economic development. Approximation and consensual politics with Russia, mostly through economic means but also for achieving a pan-European security community, emerge as the top priorities for the EU and several individual member states.

Projects following these priorities, such as the Nord Stream 2 pipeline, are completed, while new ones are initiated as part of an effort to link European and Russian economic and security interests. Meanwhile, amid greater global tensions, the U.S. shifts its security attention onto China and ongoing competition for resources makes European security much more dependent on Russia. Such a pivot to Russia, which resembles the cautious but optimistic approach from the 1990s, overshadows the objectives of Eastern Partnership proponents in the EU and subordinates the more ambitious integration and approximation processes of EaP countries.

Meanwhile, there are signs that the transition of power in Russia is about to take place and although it remains a managed process, some democratic hope is renewed in this period of transition.

While Russia’s focus is overwhelmingly centred on internal dynamics, it maintains its power and presence in the region through unresolved frozen conflicts. At the same time, a mild economic crisis hits Europe and sanctions against Russia imposed over Ukraine come under assault by some politicians who are seeking to return to the Russian market. They argue for the need to improve relations and engage the potential future Russian leadership.

A search by the EU for a new accord with Russia is also driven by the rise of China, whose growing influence is a concern shared both by Brussels and Moscow. For several years, China has been expanding its economic and diplomatic presence in the Eastern neighbourhood countries that are willing partners – to a various degree – in order to protect themselves against Russian dominance. China further develops its industrial importance and attracts the interest of political leaders who benefit from a range of Chinese digital technology that can be used for state surveillance and e-governance. The EU grows increasingly wary of China for security reasons and this new relationship between the six Eastern European countries and the Chinese comes under greater scrutiny and concern by the Union, thereby contributing to a further deepening of relations with Russia and a downgrading of EU ambitions and engagement with the Eastern Partnership countries.

Consequently, as the EU improves its relationship with Russia and neglects the integration of the Eastern Partnership countries, Russia is prepared to take advantage of the discontent and frustration within the region and begins to offer new economic incentives. Moscow is able to leverage its natural resources and relying on its own capacity to overcome the impact of earlier sanctions, brands its own modernisation programme as an attractive new offer to the region. In response, EaP countries see their under-utilised workers move to Russia, in larger numbers than previously observed towards the West. While this labour migration increases the inflow of remittances, the EaP region suffers a gradual and persistent demographic crisis, which in turn increases the appeal of intolerant and nationalist politics directed against the EU and widens domestic disparities in wealth and income.

Gradually, the impact of these developments becomes obvious, as democratic institutions are weakened and domestic instability increases in each of the six countries. Meanwhile, within the European Union itself, there is significantly less attention devoted to democratic governance or free elections, since the economic priority of forging closer ties to Russia and the downgrade of integration only weakens support for the Eastern Partnership.

Although some EaP countries try to resist these trends, others resign to a second-class status and hesitantly follow this new European mainstream. As a result, the EaP countries enter a new, unprecedented period of volatility and instability, with demonstrable fear and frustration matched by disappointment with the EU.

Internal divergence emerges within the Eastern neighbourhood region and exacerbates the underlying vulnerability of these countries to Russian power and influence. The six states countries return to a previous state of dangerous dependence on Russia, with the EU no longer seen as a viable alternative.

By the end of 2030, the countries of the Eastern Partnership are stalling in their democratic progress while tormented by external economic and political influences, which limit their agency and hamper pro-European ambitions. 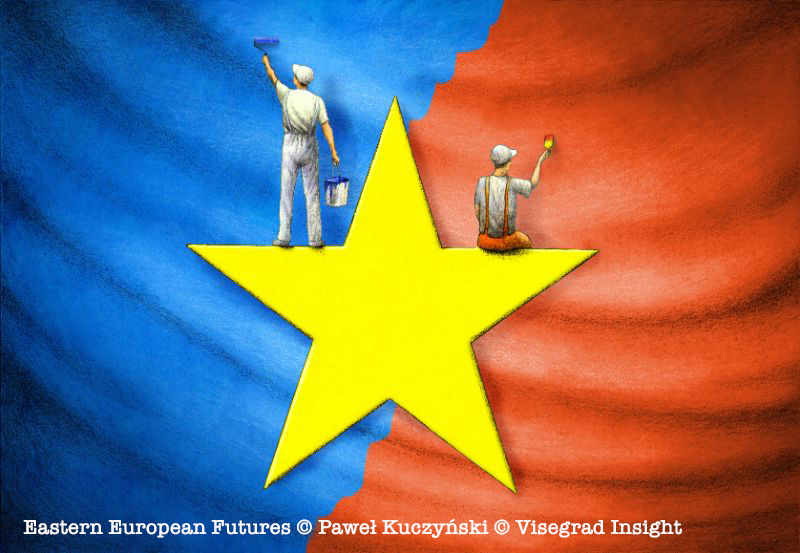 After weathering years of isolation derived from unresolved conflict and a heavy reliance on Russia as a primary security partner, Armenia stands out and stands alone as one of the few countries to gain from a new and emerging EU Pivot to Moscow. For the first time, Armenia’s ties to Russia, forged with little real alternative, is in close conformity with a renewed EU attempt at a ‘Russia First’ strategy. Armenia seeks to leverage the synergy of this trend and offers an innovative opportunity as a platform for the EU to engage both Russia and the Eurasian Economic Union. Over time, however, Armenia faces a real risk, whereby Armenia’s commitment to European values and democratic reforms become smothered by a Russian preference for a subservient and subordinate state, offering far less respect and fewer benefits than any full partnership would promise.

Europe’s changing course on Russia leaves Azerbaijan dumbfounded and confused. A balanced foreign policy between Brussels and Moscow had long been the country’s backbone for stability and independence. Now, the increased cooperation between the Kremlin and the EU spells more trouble for the government; it is increasingly losing control over domestic issues and strategic political and economic decisions. With the EU tacitly approving Moscow’s return to the region, Azerbaijan, along with its South Caucasian neighbours, reluctantly opens the door to Russian companies taking over key sectors of the economy and pushing out the local oligarchs connected to the ruling family.

Belarus is forced to learn the hard of the market economy. Growing fuel prices, taxation, state factory closure and new market-oriented financial regulations and financial strategy introduced by the National Bank of Belarus puts a halt to loans previously used to support ineffective state-owned production sites. The supply of raw materials and energy resources is diversified and the Belarusian quasi-socialist model slowly comes to an end. For Europe and China, the Belarusian role of offering a safe automotive, railroad and pipeline transit route remains crucial in light of the growing political unpredictability and a lack of effective control in Ukraine.

There are no more carrots given to Georgia, after the DCFTA and visa liberalisation. The departure of the United Kingdom, a prominent supporter of the enlargement process, and a more ambitious French agenda lead to a realignment of EU foreign policy in favour of appeasement and a security partnership with Russia. The emergence of the EU Pivot to Moscow considerably changes Georgian politics, weakens its pro-European forces and their credibility. Bilateral relations become more important, while Russia aims for EU disengagement with Georgia and the wider region and tries to fill the newly created void.

Many within Moldova’s political class are supportive of partnering with Russia and new parties emerge which take a pragmatic approach towards the changed external situation. While there is some optimism about closer economic cooperation, Moldova’s main political and socio-economic problems continue to prevail. Moldova’s dependence on Russian energy resources represents an obvious internal vulnerability of the state. Legislative efforts target improvements in the Moldovan industry, employment policy and exports but fall short of creating a strong dynamic. The domestic economy of the country grows slowly because the pathway to deep integration with the EU has been halted.

Both among the population and the political class in Ukraine there is disappointment with the EU. There is a decrease in the Union’s attractiveness and parties turn away from their EU-agenda. Some experts and politicians focus on alternatives, such as a bilateral relationship with the United States or a more isolationist and nationalist stance. Polarisation between pro-Russian forces and their antagonists is likely to grow and may cause political instability. In searching for a partnership with Russia, the EU neglects its aspirations to democratise and transform Ukraine and the region. Moreover, it loses both its leverage and influence in the Eastern Partnership region.