With parliamentary elections in Armenia quickly approaching, a profound period of transition is nearing its apex.  According to the government’s initial plan, a transformation to a parliamentary form of government was seen as the most effective way to hold power amid a potentially troubling transition of political elites.  But that early degree of optimism and confidence was quickly eroded in the wake of the sudden outbreak of intense fighting over Nagorno-Karabakh in April 2016 and a startling hostage stand-off incident that dragged on for two weeks in July.  Against that backdrop, the country’s coming election in April 2017 is no longer a predictable culmination of an orderly and planned transition.  Rather, the April election now stands as a crossroads for Armenia, as either decisive turning point or as possibly divisive tipping point, with the country’s stability and security in the balance.

For Armenia, political transition has always been difficult.  And with the absence of free and fair elections as a mechanism for peaceful change, the process of succession has long been fraught with an inherent danger of violence and confrontation.  Armenia’s political elite holds little experience of orderly political transition and, unlike neighboring Georgia, the country has no precedent for the peaceful handover of power from an incumbent government to an opposition.

Having been led by only three presidents, each of these three administrations beset by weak institutions and a meager record of acceptable elections, any change in political leadership is marked by a degree of unpredictable risk. This risk of political unrest or even outright violence in Armenia is also rooted in the distinctly daunting period of recent Armenian political history, where the country’s first president was forced to resign by the combined pressure of the second and third Armenian presidents.

Largely in order to avert the inherent risk in political change, Armenia’s ruling political elite sought to stage its own orderly and orchestrated transition, opting for a systemic transformation.  This transformation, away from a strong presidency to a more diffused parliamentary form of government, sought to provide the foundation for a more predictable and manageable transition.

Initially, this plan worked, as the Armenian government succeeded in pushing through a rushed national referendum on a set of constitutional amendments in December 2015.  For many observers, the Armenian government’s obvious rush to transform the country into a new parliamentary form of government was both sudden and startling, especially as the government did a poor job to define or defend the imperative to move so quickly.  And more troubling, for many Armenians, the poor conduct of the referendum itself, which was seriously tainted by a litany of documented and widespread voting irregularities and charges of abuse, seemed yet another missed opportunity for deepening democratic reform.  And most crucially, the referendum did little to convey trust or restore confidence in the integrity of the now even more important election for a new parliament.

Faced with the limits of public mistrust and a lack of confidence in the government’s commitments to holding a free and fair election in April 2017, the ruling Republican Party began to embark on a new strategy to improve its image and standing.  Yet even this effort was meager in scale and only focused on the margins of the party and government.

Shattering the “Myth of Invincibility”

Ironically coming one year before the pivotal parliamentary election, an unexpectedly serious outbreak of fighting over Nagorno-Karabakh in early April 2016 caught the Armenian leadership unprepared.  Although the Armenian military response was both prudent and proportional, demonstrating a rare degree of prudent restraint, the political aftermath was much more significant.  More specifically, the fighting not only shattered the long-standing myth of Armenian military “invincibility,” but also eroded confidence in the Armenian government as apparent shortages of equipment and shortcomings in force preparedness became publicly known.

For a government that relied on an image of confident leadership and military security to offset shortcomings in democracy and political reform, the negative impact of the April fighting dealt a serious blow to its carefully constructed political imagery.  A related blow came with the revelations of inadequate equipment along the front line, which not only undermined pubic confidence but also confirmed suspicions of corruption within the defense sector.

The net result, therefore, was a dual shift in the political context.  First, corruption within the armed forces was not only exposed, but it was also no longer tolerated.  In fact, state corruption was now seen as an elevated and more significant threat to national security.  Never before had corruption captured such a degree of severity and been seen to undermine security in Armenia.

Through the months that followed the April fighting over the unresolved Nagorno-Karabakh conflict, the Armenian government struggled to regain a degree of control and repair an image of weakness.  Although hindered by a lack of popular support and an equally low level of public legitimacy, the Armenian government was greatly helped by two factors.

First, as the immediate emotional impact of the clashes subsided, the government sought to reinforce its position by appealing to a more nationalist call for national unity.  And a second factor, the absence of any credible political opposition force, only helped the government to assume a mantle of nationalist posturing.

But despite a seemingly quick return to normalcy, the simmering level of discontent and deepening dissent only fester, in part exacerbated by the government’s reflexive return to an arrogant but risky position that ignored popular demands for change within Armenian society.

With a combination of mounting discontent and an unresponsive government, the situation of seeming calm was shattered in July when a determined by desperate group of armed men stormed a police station in the Armenian capital in July 2016.  The criminal act, carried out by gunmen affiliated with a small marginal, but radical opposition group.

While many ordinary Armenians understood the desperation, and some even supported the criminal actions of the gunmen, the two-week incident was not only unusual, but represented an aberration for Armenia.  Regardless, the real lesson from the incident was that the simmering discontent and sense of desperate frustration within society could no longer be ignored or denied by the authorities.

Responding to the events of both April and July, the Armenian premier and much of his cabinet became the first victims, with a sweeping reshuffle in September 2016.  With the quick appointment of a new premier, reflecting the need for the Armenian government to demonstrate a new image of stability and confidence, there are now two significant observations.

First, the new prime minister is challenged by a similar situation that President Sarkisian faced when he first assumed the presidency.  More specifically, Sarkisian began his first term as president in 2008 in the immediate wake of the March 1, 2008 post-election violence that left at least 10 dead in a violent confrontation between protesters and police.  That legacy haunted Sarkisian for some time, well into his first term, driving him to distance himself from his predecessor, Robert Kocharian, whose responsibility for that violence as president at the time tended to only hinder and hobble the start of the Sarkisian Administration.

Likewise for the new premier, the legacy of entrenched corruption, a sharply polarized public, and the inheritance of not only an economic downturn but also deeply rooted public mistrust of government, pose even greater challenges from the start.  And while this backdrop may explain the political reasoning behind his appointment, it will only make his debut even more difficult and daunting.

Second, the current political context in Armenia is dominated by the coming parliamentary elections in April 2017, which are only more significant given the December 2015 decision to switch to a new parliamentary form of government. In this context, both the former prime minister and his successor will be essential for the ruling government’s capacity to dominate the elections, largely through the use (or abuse) of the advantages of incumbency, or a reliance on so-called “administrative resources” of leveraging the government’s extensive perks of political patronage and by pressuring civil servants and state workers to vote for the ruling party. 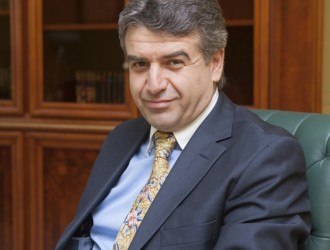 The new prime minster, Karen Karapetian, is a familiar and largely respected face in Armenian politics.  And the new premier also offers a number of new political considerations.  First, unlike many of the more prominent members of the ruling political elite, the 53-year old Karapetian holds a much more impressive degree of professional experience outside of Armenia, having established his own career rising to senior executive positions in Russian subsidiaries of the Gazprom gas concern.

But this is also a potentially negative aspect as well, suggesting that he has or must have held close ties to the Putin Administration.  This also comes at a bad time politically, given the recent crisis in relations between Armenia and Russia, making the traditional political appeal of a pro-Russian figure with close Kremlin connections much less attractive to the ordinary Armenian.  Moreover, the fact that Karapetian has mainly lived in Russia for the past six years further means that although he can be seen as distant and remote from a recent round of political scandals and crises in Armenia, his “white knight” image of rescuing Armenia from outside the system will not endear him to the powerful vested interests and oligarchs controlling Armenia’s closed political and economic system.

Moreover, Karapetian also has a political track record that suggests his earlier weakness in standing up to or challenging the country’s infamous oligarchs.  This is also the reason behind his surprising decision to step down as the mayor of Yerevan in 2011, citing “personal reasons,” after holding the post for less than one year and returning to Moscow.

Thus, despite some sense of optimism over his appointment, the return of Karapetian as the country’s new prime minister should not be seen as a significant success for reform or democracy.  Rather, the change of political personalities does not infer any substantive shift in policies, which means that the country’s fundamental problems only remain unaddressed.  From this perspective, the move may be yet another ‘missed opportunity’ for real reform and sincere change in Armenia.  And more dangerously, it has become only more risky for any incumbent Armenian government to continue to ignore popular demands and pressing expectations for change in the country.

Therefore, in terms of the outlook for Armenian domestic politics, two distinct scenarios are expected in the run up to the country’s parliamentary election in April 2017.

First, the ruling Republican Party will most likely adopt a new stress on national security, aimed to both repair its own damaged image in the wake of the loss of territory in the April fighting and to restore its political posture as a strong and decisive party capable of leadership and statesmanship.  This greater emphasis on national security will be difficult for the government, however, as the political ramifications from the April clashes was the stark recognition that corruption is a direct threat to national security.

Yet with the expectation for yet another outbreak of hostilities and open warfare over Nagorno-Karabakh in the early months of 2017, the domestic Armenian (and Azerbaijani) political landscape will tend to be dominated by an agenda drive by security and defense issues.

The second likely scenario will be a “race to the bottom” by much of the country’s aspiring opposition parties, more comfortable with putting forward alternative personalities rather than presenting viable policies or platforms.  This will only elevate the nationalist rhetoric and once again, deprive the Armenian voter of much of a choice or even a voice in the coming elections.  Thus, it remains unclear whether the April election will mark a significant turning point or a serious tipping point for the country.