Ukrainian fatigue, the lack of positive image, “Minsk-2” process as both major success and greatest failure

Ukrainian fatigue, the lack of positive image, “Minsk-2” process as both major success and greatest failure are the main features of Ukrainian foreign policy outlined by experts. The survey of Ukrainian and international analytics was conducted by the Foreign Policy Council “Ukrainian Prism”. Its results predominantly correspond to the findings of the think tank’s own research.

Opinions and advice of the respondents turned out to be unexpected and instructive, and must be considered by those responsible for the foreign policy agenda in Ukraine.

Solid “C ” and need to correct the mistakes

When analytics were asked to rank the foreign policy of Ukraine in 2015 on a 5-point scale most Ukrainian experts (56%) as well as professionals from abroad (69%) rated it with “C”. This result is expected. The Ukrainian issue indeed still remains on the agenda of the international community largely due to the efforts of our diplomats and politicians in the international political field. However there were no breakthroughs and achievements that would radically change the position of Ukraine in the international system. The international political situation has not created conducive environment either. The West is focused on its own problems, so it is challenging to keep the Ukrainian question afloat among the priorities of world leaders even for ardent supporters of Kyiv. Furthermore the internal quarrels in Ukraine were not of help. In the West there are talks on the fatigue from Ukraine which is perceived as the state, whose people are ready to overcome dictatorship in revolution, but whose newly elected leaders fail to implement reforms and fight corruption.

It is noteworthy that

Foreigners are set somewhat more optimistically.  Low ratings are used only by 13% of foreign respondents. This result is quite encouraging for Kyiv. Western experts are still enthusiastic about Ukraine, and frustration is not a dominant trend. As for Ukrainian specialists on international relations, their low scores can be explained by high expectations that are common for injured post-revolutionary society. This assumption is supported by the fact that, speaking about the most important achievement of Ukrainian foreign policy in 2015, 12% of respondents among Ukrainian experts could not name a single achievement. 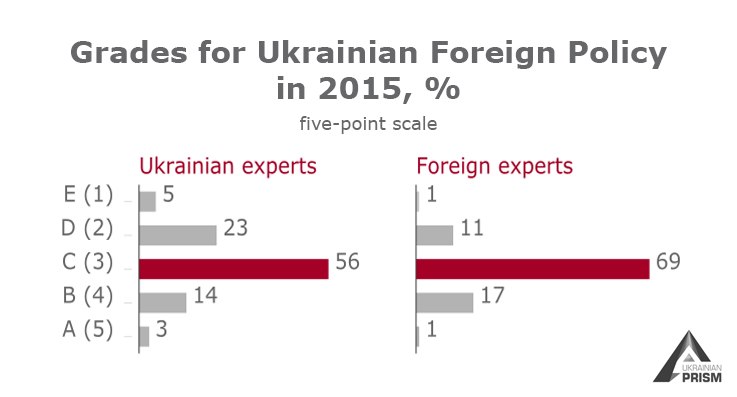 The Minsk process and suspension of the acute phase of hostilities in eastern Ukraine are named as the most important victories in diplomacy both by Ukrainian and foreign experts. At the same time, every third of Ukrainian analyst surveyed calls Minsk process the biggest defeat of Ukrainian diplomacy as well. To explain this paradoxical assessment one can address the comments by foreign experts. They are also aware that the Minsk process and arrangements are far from ideal. Minsk agreements are the result of a compromise that was born under the gunfire in eastern Ukraine and are kind of temporary steps, an attempt to return to the negotiating table and cease fire. Although the launch of the Minsk process contributed to de-escalation in the Donbas to a certain degree, people are still dying, and there’s no notable progress in implementing the “Minsk – 2”. In such circumstances, the Minsk agreement is difficult to perceive as a significant achievement.

However, foreign experts stress that if the Agreement is not implemented, then Ukraine has to offer an alternative solution. If Kyiv does not offer such an alternative, then it should not complain that current format is a disaster as it merely creates an image of Ukrainians simply admitting that there’s no alternative for defeat.

So the answer to the question whether the Minsk process is Ukrainian victory or defeat is as follows:

“Minsk” is only an interim instrument to return to political dialogue instead of a “dialogue of the guns”. Those who find it inefficient should be more proactive in promoting alternative formats.

Interestingly, foreign experts find the lack of internal reforms in Ukraine one of major failures of Ukrainian foreign policy. The failures in the fight against corruption do not allow the country to form a positive image on the international arena. Foreign experts emphasize, that without internal transformation it will be difficult for Kyiv to achieve significant changes on foreign policy fronts.

This approach is somewhat controversial. After all, sanctions against Russia and support for Ukraine should be seen primarily as a punishment for Moscow’s brutal violation of international law and support for victims of such violations. Instead they are perceived by the West more as a reward for Ukrainian reforms. However, even disagreeing with such position, Ukraine has to consider it and to be conscious that without reforms we’ll lose the support. Meanwhile sanctions against Russia are inextricably linked to whether the Ukrainian state is able to break out of the circle of corruption and failed reforms.

There’re also positive aspects. Attention of the West is focused on the Ukrainian reforms. Thus civil society in Ukraine, which was and remains the main driver for change in the country, now has powerful allies and has to benefit from it fully, despite the inertia of the system and attempts of revenge by some political forces. 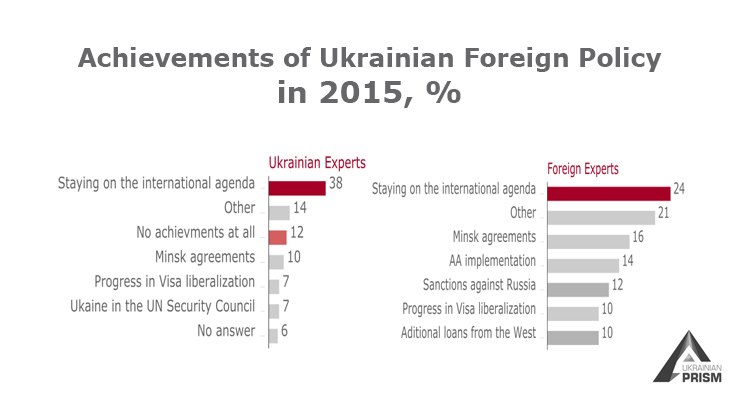 Somewhat different are the ideas of Ukrainian and foreign experts on steps Ukraine should take to improve its position on the international arena. Naming such game changers Ukrainian experts refer to cooperation with the EU (28%), security initiatives, i.e. the reform of the UN Security Council, the establishment of regional security organizations and strengthening of security measures on Ukrainian territory (25%), maintaining pressure on Russia and countering Russian aggression (25% ). Creating a positive image of Ukraine abroad and countering Russian information attacks comes only eighth (8%) in the list of priorities.

For Ukrainian analysts it seems obvious what Kremlin is doing on our territory and additional arguments seem superfluous. Foreign experts however object. They (33% of the respondents) just like the Ukrainians believe that cooperation with the West (EU and US) and implementation of the Association Agreement with the EU should be the priority. However, as the second priority comes a conduct of domestic reforms, fighting corruption and creating a positive image of the state (as mentioned by 30% of respondents).

We are told to stop referring to the Soviet legacy or external aggression and form our own brand.

For foreigners, it is even more important than resolving the conflict in the East, which was mentioned third in the list of priorities generated by foreign experts (17%). 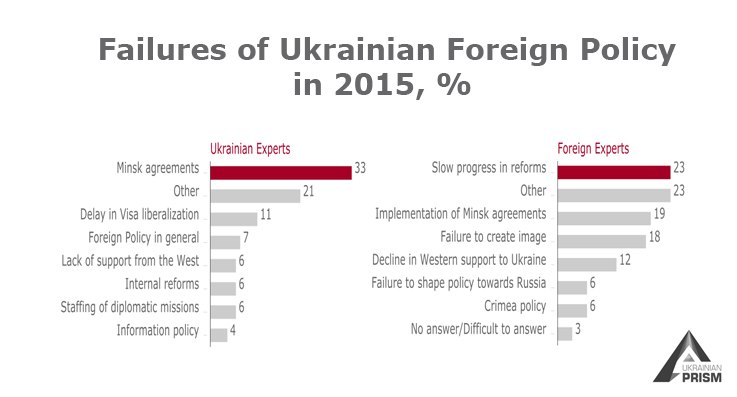 Ukrainian and foreign experts have different prospective on Ukrainian priorities in the future. Both groups of experts agree that it is necessary to establish cooperation with the US and European institutions. However, Ukrainians gave the third position to the countries of Central and Eastern Europe and the Baltic States. One can assume that this is due to the fact that these states share Ukrainian concern about Russian neo-imperialistic politics and are most aware of the consequences of Russian hybrid war against Ukraine and the EU. Thus they are our natural allies.

Foreign experts think more clearly and state that the third most important direction for Ukrainian diplomacy should be cooperation with Germany and France.

Despite the fact that Ukrainian neighbours express their support and sympathy, it is the Commission and the “great states” that decide everything in the “club of the EU”.

So they are the ones to open the dialogue with.

As for relations with Russia, this area is a priority for almost one third of the respondents among foreign experts (27%) and only one in ten among Ukrainian ones (10%). This is probably due to the fact that Ukrainians are driven by emotions, understandable for the state that de facto is at war with Russia. And our foreign counterparts, in contrast, are aware that the Russian Federation will continue to remain a neighbour of Ukraine and we’ll have to deal with it anyways.

In general, many answers of Ukrainian and foreign experts in the assessment of foreign policy coincide. The differences can be partly justified by Ukrainian emotional approach on the one hand and by the foreigners’ commitment to the real dimension of international politics on the other hand. It is hoped that further expert dialogue will help to overcome existing differences and convey the views of experts to one another. Thus the impact of the expert community on the international and domestic policy will allow Ukraine to overcome internal problems, take its proper place on the international arena and become a new brand. “Ukrainian prism” will continue to monitor the progress in this matter.

* The survey was conducted during February and March 2016. It involved 80 experts from Ukraine and 86 from the EU, Eastern Partnership and Central Asia.