The rampant flood of disinformation related to the COVID-19 pandemic turns out to be a test for state disinformation resilience. While Eastern Partnership countries are obviously focused on managing humanitarian and healthcare issues related to the coronavirus outbreak, the information sphere is also under strain. The sources of disinformation can be different (both domestic and foreign), their consequences are similar and could generate panic, distrust in governmental activities, and crisis mishandling.

Which Eastern Partnership state had a more efficient response to pandemic-related disinformation? Who had more impact from measures taken in the information sphere: governments, media or civil society? These were the issues studied by analysts from all six countries and Romania, led by the Foreign Policy Council “Ukrainian Prism”. The research presents an overview of the COVID-19 related actions and communication strategies, as well as disinformation narratives in each of the studied countries for February-July 2020. The local experts in seven countries analyzed the actions, statements, and initiatives of both governmental and non-governmental institutions, including media and religious organizations, as well as narratives present in the public and media discourse.

The analysis showed that even if in the majority of countries the first cases of COVID-19 were detected in March, the disinformation and conspiracy theories had been spreading since January. They were part of the global tendency and had mainly a geopolitical nature linked with China-US discourse or fear of the unknown.

One of the main factors that influenced disinformation flow was timely and sufficient, as well as coordinated delivery of information by the appropriate governmental authorities. As soon as the media and public had open access to information, through regular briefings, official websites, etc., the information vacuum has been filling, leaving less space for gossips and manipulations.

Media had a serious role both in disinformation spread and debunking. Unfortunately, in some countries, the media became a hostage of the political preferences of their owners, or of the lack of the specific knowledge necessary for covering pandemic stories.

All countries faced a problem of balancing between the necessity to prevent the spread of the disinformation, thus blocking some news or online resources circulating them, and a right for free speech and media activities. However, the level of governmental criticism was arguably correlated with a level of trust in governmental actions. For instance, in Azerbaijan and Belarus there have been numerous previous cases of blocking as a punishment against the opposition, so any new restrictions have been perceived through the lens of additional pressure. Whereas in Ukraine, the public accepted the necessity to block some Facebook pages by security services as a necessary step to prevent disinformation spread, as previously such actions have been predominantly connected with preventing Russian or separatist propaganda.

Romania, Ukraine, and Georgia ranked the highest in terms of resilience, society and governmental response, although still did not reach the top marks. Concurrently, Azerbaijan, Belarus, and Moldova scored the lowest. For government response, Georgia received the highest score (6 out of 9), followed by Ukraine (5 out of 9), while Moldova – the lowest (0). Media performance was the best in Romania (3 out of 4) and the worst in Belarus (1 out of 4). Civil societies’ response was the most active in Ukraine and Romania (7 out of 8 for both countries) and the least active in Azerbaijan and Belarus (1 out of 8 for both countries).

As the study indicated, while the Russian narratives are steadily occupying public discourse, during the pandemic, Russia was not the only source of disinformation, leaving enough space for global and domestic narratives generation. Most of the disinformation narratives, circulating during the pandemic and identified in all the studied countries, could be grouped as follows: health-related (e.g., symptoms, diagnosis, cures); geopolitically-oriented (e.g., actions or influence of the third states, those related to foreign policy, foreign assistance); government-related (e.g., threats to democracy and human rights, ‘failed’ governments, political cleavages, etc.); conspiracy theories (e.g., 5G network, virus as a purposefully created bioweapon, virus invented by Bill Gates, etc.).

“Even if in the majority of countries the first cases of COVID-19 were detected in March, the disinformation and conspiracy theories had been spreading since January.”

In Azerbaijan, disinformation campaigns had roots both at the global and national levels, while the authorities have largely mishandled the situation. Information from state-run media and research centers in Russia has remained the main source of COVID-19 disinformation with a Russian-speaking community as the most vulnerable group in the country. Independent media and civil society were immensely limited due to the general political situation in the country. Strict restrictive measures imposed by the government have been highly criticized and did not have a positive effect on Azerbaijan society’s resilience to disinformation. Despite the fact that high-level authorities were providing facts and basic information, they lacked openness for questions, transparency, thus creating an information vacuum. Religious communities, including their leaders, were active neither in information discourse, nor in spreading disinformation. The main narratives were changing with the development of pandemic, starting from the geopolitical ones (reports about the United States creating COVID-19 as a biological weapon and the European Union falling apart) to those, during a peak of the pandemic, appraising the so-called ‘successes’ of the government in handling the pandemic, claiming that ‘Azerbaijani experience’ of measures and fight against a coronavirus are studied by the world.

Armenia witnessed a serious range of anti-governmental narratives connected with the general political competition in the country when political disinformation was mostly spread by political opponents to undermine trust in the Armenian government. The government’s initial response started with the appointment of Deputy Prime Minister as a central figure or a “point person,” as well as with systematic updates provided by the Ministry of Health. Regular briefings had a positive effect for filling information vacuums. However, the issues of pandemic mishandling and data privacy shadowed an initial positive response. Given that the media landscape is highly politicized in Armenia, it had its negative effect. In terms of social media, what had a significant effect are (former) doctors – bloggers, who used to mix politics and medicine and spread disinformation about the virus. Civil society had both positive and negative responses and was involved in both spreading and debunking disinformation. The main narratives popular in Armenia have been those criticizing masks and quarantine measures, building distrust for the government, and addressing George Soros’ role in virus spread.

Belarus case has its particularities since it is the only country where quarantine and emergency state have not been introduced. In addition, the pandemic has been happening along with a very tense election campaign. Thus, the government and top officials themselves became one of the main sources of disinformation, together with the Russian information sources. At the first stage of pandemic spread, Minsk’s information policy was largely focused on preventing panic among the population by publishing very limited data about the epidemiologic situation and downplaying the risk of infection. President Lukashenko became the main newsmaker of false information. This resulted in an information vacuum and spreading gossips about the real situation around COVID-19. Independent media and opposition politicians criticized the governmental actions and tried to present alternative sources of information. This was used as a reason for attacks against the opposition media. In the situation of no quarantine in Belarus, civil society organizations and groups have been more involved in advocating stricter measures of social distancing and supporting medical personnel than in debunking activities. The main narratives were about denying the COVID-19 danger, geopolitical competition between China and the US as a reason of the crisis, and gossips about high mortalities in different towns.

“All countries faced a problem of balancing between the necessity to prevent the spread of the disinformation, thus blocking some news or online resources circulating them, and a right for free speech and media activities.”

The governmental response in Georgia was one of the most successful, resulting both in the best pandemic situation and in good communication strategies. However, the political crisis and expected parliamentary elections during the pandemic had a negative impact on the information environment. The biggest challenge for Georgia was communicating quarantine measures and other restrictions to the national minorities (Azerbaijan and Armenian communities) that led to a number of incidents. Establishing the Interagency Coordination Council by the Government of Georgia had its positive effect, given that important information was provided, daily briefings organized, special websites and a hotline created. In terms of media, the problem with Russian media and with the one at the occupied territories of Georgia that retranslated Russian disinformation could be observed. Most of this disinformation was connected with the fake news about US laboratories in Georgia that likely had created COVID-19. Anti-US, anti-liberal, anti-quarantine narratives have been the most popular. 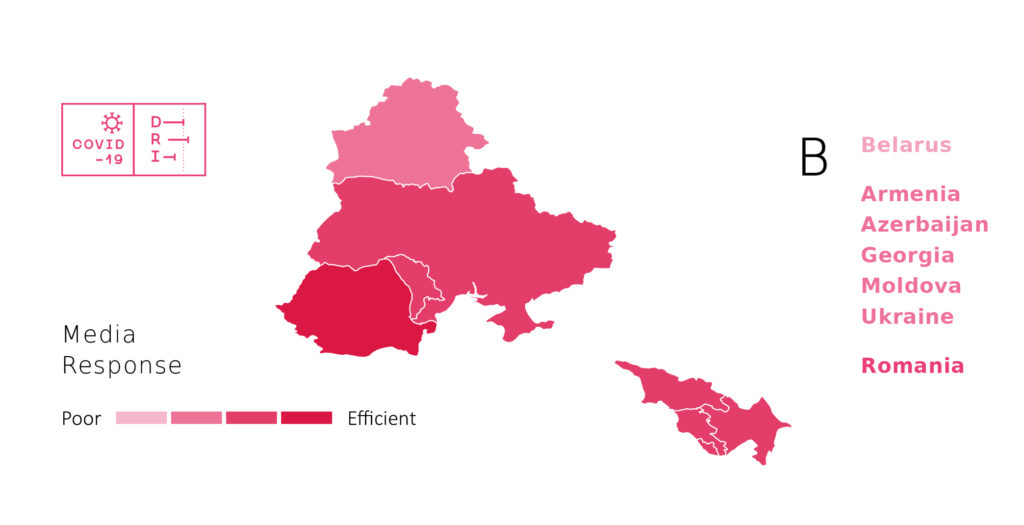 In Moldova, the pandemic response and its coverage in the media have been highly politicized. The general political competition in the country had its negative effect and led to an increased level of misinformation and manipulation with information. Russian and Chinese disinformation campaigns and media influence have been noticed. Moldova’s Response Plan presented in March had a communication component that included media and social media, top officials briefings, hotlines, and websites. However, the generally low trust of the Moldovan population in their government and disconnection between the information provided and real facts on the ground led to the negative perception of the official information. In addition, the President and the Government provided contradicting information. A significant presence of the Russian media content and Russian TV channels had a serious negative effect, which included both false news and propaganda. The church was one of the sources of disinformation, including spreading fakes about 5G and virus origin (most of the narratives were identical to those spread by the Russian Orthodox Church). The main narratives in Moldova were about methods of treatment, fears about a possibility to recover, as well as conspiracy theories (population chipping, 5G, US laboratories). In addition, a geopolitical discourse was present, mainly ‘the death came from the West, and help – from Russia and China’. 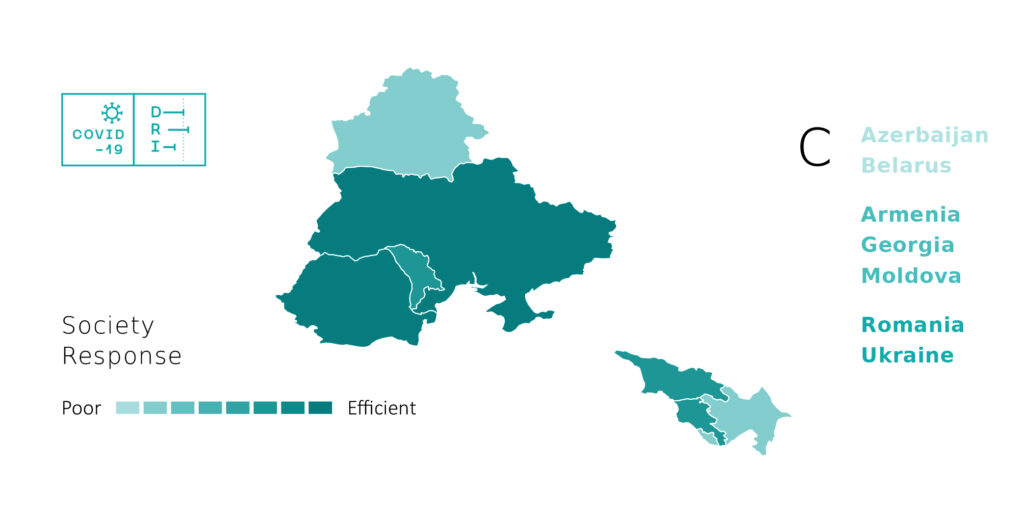 Ukraine
A relatively long experience of information war with Russia, as well as existence of the number of debunking and information security NGOs, assured some sort of resilience towards disinformation and fake news. The government response was satisfactory with daily information provided and special websites created. Security services were also involved in preventing disinformation spread. Media appeared less resilient due to the politicization of the media landscape, lack of professional knowledge, Russian influence, and reference to unchecked sources. At the same time, there were positive examples of media outlets creating special coverage to fill the information gaps and debunk myths about COVID-19. Civil society in Ukraine became the most resilient and prepared, actively working in all directions. Disinformation spread in Ukraine differed depending on the situation. It has started with fake news and conspiracy theories due to the lack of knowledge, in addition to geopolitical narratives about foreign support in fighting a pandemic. The most popular disinformation was about virus origin (including US laboratories in Ukraine) and methods of treatment, as well as George Soros’s role in causing pandemic.

“While the Russian narratives are steadily occupying public discourse, during the pandemic Russia was not the only source of disinformation”

The following recommendations have been developed by experts that can be applied not only in individual countries, but in the whole region.