Economy in The Eastern Partnership: partners, competitors or bystanders?

The states build their economic relations within the region and with the third parties without regard for the other participants in this EU policy. But in the future this site can become especially interesting to launch a dialogue between the European Union and the Eurasian Economic Union. These are the conclusions of the EaP Think Bridge international expert round table, held on 27, November in Minsk.

The coexistence of the EU and Russia integration initiatives was the focus of the discussion. Indeed the Eastern Partnership countries are divided into two camps. On the one hand, Georgia, Ukraine, and Moldova, the signatories of the Association Agreements with the European Union, are already benefiting from the free trade zone. While Armenia and Belarus are the members of the Eurasian Economic Union led by the Russian Federation, which, however, does not prevent them from seeking the ways to enter the European markets.

“Why should the European Union speak to the Eurasian Economic Union? We now have this stalemate between the West on the one side and Russia on the other side. And I’m quite sure that this stalemate is not beneficial for any party: neither for the West, nor for Russia, and definitely not for those Eastern Partnership countries between those two blocks”,—said Nikolaos Gavalakis, the Director of the Regional Office “Dialogue Eastern Europe” at Friedrich Ebert Stiftung, while opening a discussion. 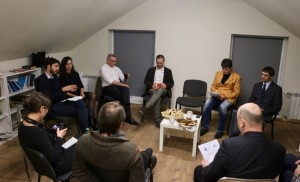 “The negotiations between the EU and the EEU are just beginning. And such pragmatic dialogues will take place, this is the beginning of a technical interface — not political or ideological but technical. For Belarus, this process is of great importance”,—continued Rosa Turarbekova, an associate professor at the Belarusian State University.

After signing the Comprehensive and Enhanced Partnership Agreement with the EU at the Brussels summit, Armenia can become a link between the two poles. And Belarus is closely watching this experience.

“The Eastern Partnership is becoming more Eastern and more about the partnership, where countries like Armenia are becoming important actors, bridges for the EU and the EEU cooperation”,—said Richard Giragosian, the Director of the Regional Studies Center (Armenia).

Although the experts acknowledge that the benefits of cooperation with the EU and the membership in the EEU are incomparable, let alone the political and ideological component of the partnership.

“Comparing the EU and the EEU is like comparing the Zhiguli and Mercedes. Both vehicles are able to move, but they are different. Although Zhiguli is more usual for the Moldovan citizens, but the Mercedes does not have to be repaired twice a year. Although the problem for Moldova is not only to choose a car, but also to learn how to drive”,—said Danu Marin, an Expert of the Foreign Policy Association of Moldova.

And while the statistics does not yet show a significant shift in the economic indicators of Moldova, Ukraine, and Georgia after the entry into force of the free trade zone, but some positive changes in the countries are noticeable. 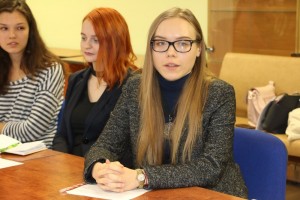 During their visit to Minsk, the EaP Think Bridge initiative experts also discussed the cooperation opportunities for the civil societies of the countries of the region with the members of the Belarusian National Platform of the Eastern Partnership Civil Society Forum. And they also summed up the results of the Brussels EaP summit with the students of the Faculty of International Relations of the Belarusian State University.