Moldova Between Two Fires: The 2016 Presidential Election and the Balance of Power

The Republic of Moldova is one of the poorest European countries in the process of democratic transition with a declared pro-European pattern of development. Although Moldova does not rank among the major international players, both the West and Russia are paying greater attention to the small country situated at the East-West crossroads. After the Constitutional Court in Moldova judged in favor of direct presidential elections, Moldovans went to the polls on October 30, 2016 for the first time in 20 years. Igor Dodon, the pro-Russian leader of the Socialist Party, and Maia Sandu, leader of the center-right Action and Solidarity Party, both qualified for the runoff. Dodon defeated Sandu by 4 percentage points to win the presidency (52.1% – 47.89%). The campaign emphasized the nation’s geopolitical controversy as Dodon favored a pro-Russian approach, while Sandu was pro-European Union (EU). Up to this point, Moldova had continuously declared a pro-European domestic and foreign policy vector based on the Association Agreement signed in 2014 and ratified by all EU member states. Electing Dodon, however, has called into question whether Moldova will continue its pro-Western path or it will look more towards Russia. In addition to the geopolitical controversy, the issues of deep-rooted corruption in the society and its fragile institutional structures also emerged during the campaign.

In March 2016, Moldova’s Constitutional Court (CC) ruled against the indirect election of the president through Parliament disregarding public debates or consultations on the matter. The decision was perceived as a controversial one, highly influenced by the ruling elites, led by Vladimir Plahotniuc, the country’s richest oligarch and its least popular politician. Allegedly, the goal was to divert public attention from the reported one billion dollar theft, representing one eighth of Moldova’s GDP. The CC’s decision was triggered also by the mass street protests organized by new central-right movements backed at some point, genuinely or not, by pro-Russian oriented parties with an anticorruption message. It was assumed that the direct election of the president by the people of Moldova would enhance the political legitimacy of the government in the eyes of the public and would reduce the high level of mistrust towards governmental institutions.

Although the candidates did not necessarily focus on geopolitical issues during the electoral campaign, foreign policy considerations were important to the voters

Although the candidates did not necessarily focus on geopolitical issues during the electoral campaign, foreign policy considerations were important to the voters. Dodon managed to mobilize the pro-Russian electorate by promising to reopen the Russian market to Moldovan goods, promoting Eurasian integration, and creating facilities for Moldovan working migrants. Moreover, his anticorruption messages appealed to people disappointed in the current ruling elites. Dodon represented, almost solely, the left wing of the electorate, as the Party of Communists did not nominate a candidate and the popular leader of ‘Our Party’, Renato Usatai, could not run because he did not meet the required age qualifications.

Maia Sandu, on the other hand, during the first round of elections, faced competition among right-wing voters. Two Romania-unionist candidates, and the former prime-minister Iurie Leanca, among others, also ran for the office. Sandu did not directly address foreign affairs issues but as a Harvard graduate with experience at the World Bank, she clearly positioned herself as a pro-EU candidate. Sandu also promoted an anti-corruption and anti-oligarchy platform. In spite of the multitude of right-wing candidates, the short campaign period, limited financial resources, the disinformation campaigns run against her and little access to media, Sandu managed to come in second in the primary. 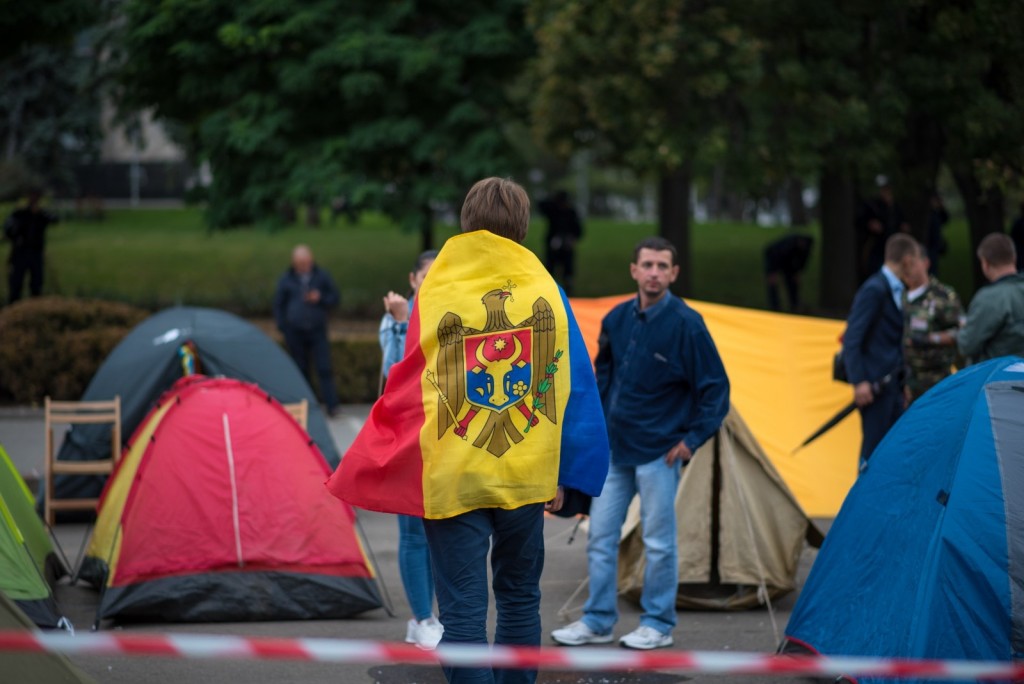 The international environment is an important part of Moldova’s domestic and foreign policy puzzle. After the 2009 parliamentary elections, the EU welcomed the new Alliance for European Integration (AIE) created by the winning pro-European parties to promote democratic reforms and good governance. The EU viewed the AIE as a stable partner on the Western border of the EU, and prized Moldova as the “success story” and the “front-runner” of the Eastern partnership. But the Alliance failed to implement the reforms and the ruling parties’ leaders were involved in corruption scandals to the growing disappointment of the population. After the 2014 parliamentary elections, the EU invited the winning pro-European parties to create an “accountable government”. It was only after the ratification of the European Union – Republic of Moldova (EU-RM) Association Agreement that the EU leadership addressed “politicization of state institutions, systemic corruption, public administration reform aimed inter alia at enhancing the effectiveness of regulatory bodies, transparency and accountability in the management of public finances” in Moldovan politics with a stronger voice. This was a clear shift of the EU leadership’s approach towards Moldovan political elites. The EU reacted to the one billion dollar fraud and other alleged political corruption scandals. The International Monetary Fund (IMF), the World Bank (WB) and the EU froze financial aid to Moldova in 2015. The EU promised to restart financial assistance to Moldova when a new ruling coalition would be formed and the government would secure a financial agreement with IMF.

Russia’s ‘special interest’ in Moldova is based on several issues, the Transnistrian conflict being one of the most important.

Over the years the Kremlin has continually supported left-wing parties, such as the Party of Communists, the Party of Socialists and the leftist, populist “Our Party”. The Socialist leader Igor Dodon secured President Vladimir Putin’s support before the 2014 parliamentary elections in Moldova. In the 2016 presidential elections Russia backed up Dodon by favorable media coverage and Patriarch’s Kirill’s blessing.

The Kremlin, as well, has tried to use the autonomous region of Gagauzia to pressure Chisinau’s leaders. The Russians supported the referendum in Gagauzia to join the Eurasian Customs Union (now Eurasian Economic Union). With the support of the Gagauzian administration, Dodon won 98.89 percent of Gagauzian vote in the runoff.

It seems that Russia will persist in pressuring Chisinau’s leaders via the secessionist regions of Transnistria and Gagauzia, to undermine Moldova’s orientation toward Western Europe. To neutralize Russia’s efforts, Moldova’s leadership should continue their commitment towards implementing democratic reforms, fight corruption, and come up with social inclusive policies for the territories with high secessionist potential.

The current state and forecast for the future

Socialist leader Igor Dodon’s victory in the presidential elections might lead to the assumption of a pro-Russian vector for the future of Moldova’s foreign policy. But, electoral rhetoric does not always translate into policies. Moreover, the Moldovan Presidency has limited responsibilities. The power to make decisions regarding foreign and domestic affairs resides in the hands of the Parliament and the Government. In practical terms, the president does not have the power to repeal the EU-Moldova Association Agreement. Currently, the Prime-Minister Pavel Filip is the leader of the EU-leaning coalition that still controls the legislature. Moldova has already established strong ties with the European Union through the EU-RM Association Agreement including the Deep and Comprehensive Free Trade Area (DCFTA). Taking into account the country’s cultural and political polarization, any decision on a radical shift of Moldova’s foreign policy vector would be met with large demonstrations and street protests.

The president does not have the power to repeal the EU-Moldova Association Agreement.

The political setting after the presidential elections is balanced by a pro-Russian president and a pro-EU parliament. Although the next parliamentary elections are scheduled for 2018, Dodon has already announced the willingness to initiate early parliamentary elections in 2017. Having the largest number of seats in the Parliament, the new elected president believes that the Socialist party could obtain a majority in parliament thus weakening the pro-European Coalition. Early elections are welcomed as well by ‘Our Party’ leader, Renato Usatii, who supported Dodon in the second round of the presidential election.

However, not all political parties are supportive of this initiative. The leader of the Democratic Party, an allegedly very influential politician Vladimir Plahotniuc, stipulated that the new President does not have the legislative power to declare the early parliamentary elections, and this would be detrimental to the strategic interest of the country. The Democratic Party (PDM) announced that they support reforming the electoral system so that half of the members of the parliament are elected on party lists, and the second half in single-member districts. As the PDM has significant financial and media resources and holds many governmental positions, Plahotniuc hopes his party can increase its share of seats in the next parliamentary election.

On the center right, Maia Sandu and her Party for Action and Solidarity (PAS) gained name recognition during her run for president. Even though she did not win the presidential election, she has gained support on the national level and from members of the Moldovan diaspora. Sandu boosted her public support with her anti-corruption message and pro-European orientation. In order to be competitive in the next parliamentary elections, PAS needs to focus on a communication campaign on the grass roots level in the northern and southern regions of Moldova, to build up local support, to create territorial organizations, and establish a strong team with well known and trusted leaders.

It is still too early to predict the behavior of the other center-right political parties, the Liberal Democratic Party, the Liberal Party of Moldova, and the Democratic Party. There are questions about the probability of them forming a consolidated bloc with PAS to counterbalance the political influence of Dodon’s and Usatai’s leftist parties. The new strong, uncompromised political force with the pro-European orientation would preserve the political balance in the country.

On the international level, the ongoing conflict in Ukraine and Russia’s escalating cyber warfare has increased security threats in the region. As a result, international organizations and the European Union have revised their policies in regard to Moldova. In 2016, the Moldovan government renegotiated its agreements with the IMF and the WB. Following this news, the EU guaranteed Moldova the access to 15 million Euro to carry out a public administration reform, and 45.3 million Euro of budget support assistance. To secure the EU financial interest, a new collaboration was established between the European Anti-Fraud Office (OLAF) and Moldovan National Anti-Corruption Center (CAN) to prevent corruption and to monitor the implementation of the financial projects. The future collaboration of the European institutions with Moldova will be determined by stricter monitoring of how these funds are spent