The Energy Security Platform for the Eastern Partnership countries is a relatively new concept. Once integrated in the Soviet Union’s energy system, these countries seek to part ways in fulfilling their own energy security needs.

The integration of the European Union institutions, embodied by signing of the Association Agreements, raises new concerns regarding the regional energy security. In many cases, the break with the Moscow-led energy and economic institutions was followed by some punishments from Kremlin, such as an energy-supplying pipelines blocking.

In many instances, economic and energy ties became the decisive factors for the post-Soviet countries in their decision to take a path either to Moscow or towards the Western, liberal democracies. Hence, it raises the importance of a research for the Energy Security Platform for EaP countries and policy recommendations to improve the situation further.

Background and current situation of energy security problems in the region

Among the EaP countries, Azerbaijan is the only one extracting, producing and transporting any energy resources; all the others are energy consumers.

The ongoing conflict between Azerbaijan and Armenia over Nagorno-Karabakh limited the economic cooperation between these countries, and hence the energy security platform for the Southern Caucasus countries exists only between Azerbaijan and Georgia. The mentioned conflict cut the ties of Armenia with the only energy producer among the countries of the region. Currently, the energy resources for Armenia are provided by the Russian companies through Georgia, putting Yerevan into the dependance from Moscow.

In many cases, the break with the Moscow-led energy and economic institutions was followed by some punishments from Kremlin

In fact, reducing of the economic and energy, that is the most important, over-dependence from Russia, and developing of the energy transit on the Caspian Sea–Caucasus–Europe rout bypassing Russian territory was seen by many experts as one of the main goals of the organization. In 2011, the GUAM states founded a Working Group on Energy Cooperation, and Azerbaijan was elected to coordinate this group. The next meeting  of the GUAM energy group is scheduled for September–October, 2017. 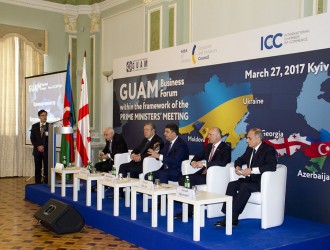 Despite this, there’re also the energy cooperation bilateral tracks between the countries of the Eastern partnership region. For instance, Georgia and Azerbaijan are the parts of the transit corridors transporting oil and gas  from the Caspian Basin to the European markets. Furthermore, the West-East transit corridor, connecting the European market with China through the Caucasus and Central Asia, also crosses the Azerbaijan and Georgia territories. These developments enable these two countries to have more integrated transit capabilities and infrastructures.

In this context, the Baku-Tbilisi-Kars railway, a regional rail link connecting Azerbaijan, Georgia and Turkey, also should be mentioned. This rail link created the additional potential for the transportation between Azerbaijan and Georgia. Meanwhile, the Georgian Black Sea ports are capable of connecting the Caucasus region with the other EaP countries in the Eastern Europe, the goods and energy products from the Caspian Basin can be easily transported to Ukraine and the EU countries.

The bilateral energy contracts were also signed between Azerbaijan and Belarus. In the end of 2016, Russia cut the oil supplies by one-third trying to habitually pressure Belarus in the gas prices negotiations. This is where Baku lent its shoulder to Minsk.

In November 2016, during his visit to Azerbaijan, the Presidents of Belarus and Azerbaijan have discussed Azerbaijani oil transportation the issue. Aleksandr Lukashenko thanked the Azerbaijani head of the state for the recent oil shipment to Belarus. Around 85 thousand tonnes of oil were delivered to the Mozyr Oil Refinery. “That was not the first time that you supported us, but that was a real one-time help. I understand that any oil producer should have a strategy. We are ready to go as far as Azerbaijan is ready to go” – stressed the Belarusian leader.

By the end of 2016, around 500 thousand tons of Azerbaijani oil were delivered through the Ukrainian port Odesa to Belarus.

Among the EaP countries, Azerbaijan is the only one extracting, producing and transporting any energy resources; all the others are energy consumers

However, the supply was stopped at the beginning of 2017. The head of the Center for Petroleum Research Ilham Shaban has commented  it saying that currently, strategic priority of Azerbaijan is to attract more foreign currency into the State Oil Fund. Therefore, the country was neither interested in the low prices Minsk was asking for, nor in the barter conditions offered. The Azerbaijani prices for Belarus were 30% higher than Russian contracts. And while there was a progress in the negotiations with Moscow on the oil supply increase, Belarus keeps seeking for the energy diversification. Some agreements on this issue were also reached with Iran.

At the same time Azerbaijan established the bilateral energy connections with all the GUAM countries, as well as with all the other EaP countries, excluding Armenia for the obvious reasons. Thus this existing network can be used as a base to build a sustainable energy network within the Eastern Partnership region.

The Azerbaijan’s oil reserves are depleting. For the next decade, Azerbaijan is expected to significantly lose its potential.

Azerbaijan has a long history of the oil extracting and transporting. Since the middle of 19th century, as a part of the Russian empire and then of the Soviet Union, Azerbaijan exported its oil through the Georgian sea ports and the Russian territory to Europe. After regaining its independence, Azerbaijan signed the “Contract of the Century”, and the Production Sharing Agreements helped the country to attract more international investments. Now, Azeri-Chirag-Guneshli, the main offshore oil field in the Caspian Sea, seems to be depleted. It might create some problems for the energy cooperation in the EaP region.

However, Azerbaijan tries to reinvent itself as a major natural gas exporter, and is rather ambitious about its gas projects (TAP&TANAP and the Southern Gas Corridor).

In addition, Azerbaijan built and enlarged its energy transportation network. Within the ongoing gas projects, it is expected that Turkmenistan will also deliver its gas from the Caspian Basin to the European markets through Azerbaijan.

As in the past, the ongoing conflict over Nagorno-Karabakh creates some problems for the including of Armenia in any of the mentioned and new projects.

Armenia currently imports oil products mostly from Russia. Depending on the customs duty, the price might range. Many experts believe, Moscow is using the Armenia’s energy dependency over Russia to gain leverage in Armenia.

In this context, joining the common Eastern Partnership energy projects may be crucial for Armenia to reduce the Moscow’s influence options in the region.

The EaP countries need a diversified energy network in order to ensure their energy security. Their previous economic and energy security dependency on Russia plays a crucial role in the decision-making process of the EaP countries and their recent moves in favor of a greater European integration. The cases of Ukraine and Georgia have demonstrated how painful the process of opting out of the Russian incentives and signing the Association Agreement with the European Union can be.

In the light of the previous observations, the following actions are recommended:

1) The EaP countries should declare their interest in moving toward some common energy security measures.

Currently, the EU countries are trying to lure Turkmenistan into cooperation on the Turkmen gas delivery to Europe. Additionally, the countries declaring their interest in the common measures may aid Ashgabat in delivering of the more promising gas export plans to the European markets.

2) The re-establishment of the economic ties between Azerbaijan and Armenia should be taken into account in order to include Armenia in the project and lessen its dependency on Russia. It is a very important measure to resume the economic ties. Currently, Azerbaijan expressed its will to cease the economic blockade of Armenia in return for the regaining control over the regions surrounding Nagorno-Karabakh. It is also vital for the rest of the EaP countries to express their support for the peaceful resolution of the Nagorno-Karabakh conflict.